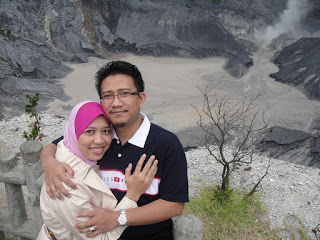 A week has passed since we came back from Bandung & Jakarta for our trip with Hai-O Marketing. It was a reminiscence of our old times in Indonesia for this is the first time we came back to Indonesia since we left in 2006.
The first time I set foot in Indonesia was two weeks after our wedding in 2003. When we signed our marital contract, I knew what I signed myself into... a long distance relationship that was surely be challenging & both bitter sweet. We went via Surabaya and we took Merpati Airlines during that time as it was the cheaper option (we were students). We spent a lovely 2 weeks in Yogyakarta attending my husband's graduation of his 4 years in Medical School (entitling him to get a BSc; Bachelor in Science). We stayed in a cheap hotel with no room service, but hey, it was 2 weeks after the wedding,so anywhere was a honeymoon.
We were separated for 3 months when I went back to Ireland, to be rejoined in December 2003, celebrating our 23rd birthday, our first ever birthday together as husband and wife. Again, we rented a room in a place called Tala Spa, a place with paper-thin wall where you can literally hear every single thing people from downstair rooms do, let alone the people in the next room. For us to shower, we needed to turned on a main tap from the first floor. At that time I was a final year medical student & my husband was in his 5th year (6years all together in Indonesia). We had a small motorbike as our main transport, and I remembered one day we went for a Japanese dinner and as we stepped out of the restaurant, the sky split to two and poured the heaviest rain I ever experience in my 23 years of life. It was during this time also that I first experienced an Indonesian earthquake (which I thought was a big truck passing by our accommodation). After a lovely 2 weeks, we were again separated by oceans and continents for five months.
My husband came to Ireland during my final exams in May 2004, and he stayed the whole month, where he gave me all the moral support I needed, staying in my room most of the time (I was sharing a house with 4 other girls) and ate bread and cheese for most lunches & dinners (and did not complained at all, not even once). I passed my final exams with flying colours, and we decided to brace ourselves for another year of separation for me to complete my housemanship in Galway.
I had an emergency laparotomy (abdominal surgery) in August 2004, exactly one year after we got married, due to a ruptured ovarian cyst, and sure enough, my husband took a month of his studies to be with me. After I recovered, he returned back to Indonesia, not before we spent a nice holiday in Madrid, Spain, as a gift from me to him, for taking care of me when I felt less like a woman (the O&G doctor was not sure I was able to get pregnant due to extend of my illness).
We were reunited in December 2004 in Yogyakarta, to celebrate our 24th birthday (I still remember the Swatch I bought him), this time in a better motel, under the management of Universitas Gadjah Mada. It's a 3-star standard room with room service, and a lot of love! We still had the motorbike, and we went all over Yogya with that motorbike. One day we even fell from the bike as we descend from Mount Merapi as the front tyre had a puncture. The funniest thing was, my husband fell first, hurt his knees, and I fell on top of him, and the first thing that popped from his mouth was "are you OK?"
That January was the last time we were ever separated. In June 2005, I completed my housemanship & decided to follow my husband to Indonesia, to start a family that we longed for so long. We travelled to 7 European countries before we left for good.
We started our lives as husband and wife in a small rented house, with 3 bedroom (which we converted to a master bedroom, a study room & a TV room), and a decent kitchen which costed us Rp9 million per year. That was the house that had witnessed many long nights of assignments in my husband's final year of medicine, a miscarriage (that tore my heart), a brief period of depression following my miscarriage, many (I mean MANY) kisses and hugs (and the rest of the love acts) that strengthen our love, our midnight prayers, the positive pregnancy test that was the initial flag of our Fatimah Yasmin (yes, she was Indonesian made), the visit from both our families during my terrible morning sickness & finally my husband's graduation day from the Medical School that made him Dr Mohd Hafiz Osman.
We left in February 2006, I started working in UITM in March, he started in Selayang Hospital in April, had 2 kids in 2 years, introduced to Hai-O in October 2007, and fast forward three years later, we returned to the golden Indonesia.
The 4 days trip was exciting and fun, but more importantly it reminded us that eventhough we had grown older (and wiser), we met many friends and done a lot of things in life, we still enjoy the company of each other, more than anything. I reminded us that we had grown from a young adult to a parent, from a naive medical student to a specialist & an enterpreuner, and there were nobody else that we would rather spend the time with, other than each other. It showered our love with sweet memories, that when we arrived in the Bandung Airport we were husband and wife, but when we left the Jakarta Airport, we were one entity... two hearts that beat as one, in two separate bodies but in one soul....
Posted by The OnE n OnLy AzLiNDaRitA at 3:24 AM No comments:

The OnE n OnLy AzLiNDaRitA